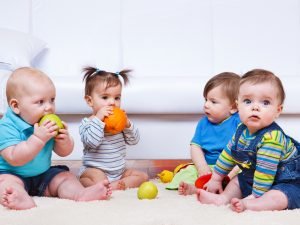 Infants who are fed a diet of uniquely breast milk are more susceptible to vitamin D deficiency, rickets and a number of other health issues. An increasing amount of scientific evidence is suggesting that – as important as breastfeeding is for a child – it does not fulfill all of their nutritional and dietary needs, specifically due to the very low levels of vitamin D contained in breast milk.

Breast milk is indisputably the most alimental source of food for a new-born, given the enormous benefits it provides for an infant’s immune system. Breastfed babies have a much-decreased risk of suffering from breathing problems, infections, colds and diarrhea. However, these well-publicized advantages of breastfeeding can often serve to mask the fact that breast milk is almost completely lacking in vitamin D, which is very important for a number of reasons.

Vitamin D deficiency in infants can cause a number of side effects. Most of these are not serious, but they can have long-term implications. A state of deficiency can lead to growth failure, hypocalcaemic seizures, lethargy, irritability, and an increased possibility of incurring respiratory infections during infancy.

The importance of supplementing infants with a regular intake of vitamin D cannot be stressed enough, Spiqy’s editor says. The current AAP-recommended daily vitamin D intake for all children (from birth) is 400 IU per day. To provide some context, 1 liter of human breast milk will provide a child with 25 IU. There is clearly a deficit to be closed, and there are tools at your disposal with which to close it.

Vitamin D-fortified infant formula is perhaps the most straightforward means by which a parent can supplement a deficiency in an infant’s vitamin D intake. Mix the formula with breast milk to provide a straightforward solution that meets the child’s nutritional needs on both fronts. Supplementation should be provided on a regular basis, and a parent might even consider extending vitamin supplementation beyond the early years to improve a child’s chances of experiencing continued good health.

Vitacost offers vitamin D drops specifically made for babies and infants. It’s called Childlife Essentials Organic Vitamin D3 Drops. It’s sold for $16.95, but if you use a vitacost promo code you will pay almost half. You can search for a vitacost coupon here.

There are several warning signs to look out for which will suggest a child might be in urgent need of extra nutrition, of which insufficient weight gain is the most ostensible and common. Other red flags to heed are cleft lip, jaundice or liver problems, respiratory illness, and serious illness of any other nature.

Should any of these symptoms be present, you will need to seek immediate medical attention for your child. It is imperative that you obtain professional advice before making any major alterations to an infant’s diet, and your GP will be able to advise you on the best way to balance nutritional supplementation with natural breastfeeding.