Room-By-Room Safety Tips: How To Baby Proof Your Home

It is recommended that the majority of your childproofing be done at one time. This insures that it is completed before a new capability results in a preventable injury.

All lower drawers and cabinets in the kitchen and bathrooms should be latched before he ever learns he can open them. Accessible electrical outlets (both dormant and in-use) protected, vertical cords raised, pool fence installed, stairway gates in place, sharp corners protected, etc. Other items can be added as the need becomes apparent; door alarms, appliance latches, medicine cabinet latches, door knob covers, deadbolt locks, etc.

Get down on your child’s level (that’s hands, knees, roll over on your back to get under furniture) and look up. Look around each room carefully as if seeing it for the first time. Crawl around and try to stick your head behind furniture, reach under furniture and feel around to see what is there (sharp springs or staples sticking out, plastic tags, etc.). Get under tables and look up; what would your child’s head hit if he stood up (sharp corners, manufacturer’s labels attached with staples sticking out, glass in the center of an end stand or coffee table).

Check out everything that would be within your child’s reach when he begins standing. An easy way to do this is to lay on your back and reach up with one arm. Whatever you can touch or grab from this position, so will a 12 months old. Leaning up on one elbow and lifting your head up as far as possible will show you about what he can be run into and bump his head; corners of dining room tables, bottoms of drawers left open, protruding low wall ledges, etc. 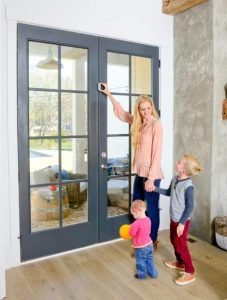 Check your rooms, one by one, with a critical eye, asking yourself if something could present a hazard. If so, how serious an injury might it result in? Can it be corrected or is another course of action required to prevent an injury?

Consider other types of dangers as well; doors without locks that lead outside or the garage. Could one of these be left open by an older child or someone else? Door knob covers can make them difficult to open but you might need assistance in keeping them closed. Door alarms for under ten dollars will give you a warning if the door is not shut within a few seconds.

Start vacuuming like you have never vacuumed before! Keep an eye peeled for those small items that the vacuum might not pick up; pins, staples, buttons, broken glass, coins. If it is on the floor kids will find it. This is his world and he will notice anything on the floor.

Keep that hot water temperature adjusted to no more than 120 degrees, at least for a few years.

Do not set your safety standards so high that you cannot live up to them or make yourself paranoid without cause. If you do, you will risk scrapping the whole concept in frustration.

Cat’s Meow Animals – introduce your child and pet. Teach your child to respect the pet and its rights (like being able to eat in peace) or keep them separated, if necessary, for a while until he understands. Never allow teasing; even docile animals can be pushed too far. Do not leave infants alone with your pet. Your pet’s reaction to a new member in the family may not be what you expect. Their “home ground” has been infringed upon and your attention is being diverted from them. Protection of their territory can be a strong instinct in some animals.

Backyard – play must be supervised totally for a young toddler, even if a “kiddie fence” is in use. Sunburn, poisonous plants, poisonous insects (some good to eat too!) and snakes, small rocks, grass, dirt and just about everything else in a yard within reach could present a hazard.

Toys – stay within your child’s capabilities when making your selections. Avoid the temptation of buying items intended for much older children. Most packaging on the market will indicate a minimum age that the manufacturer recommends. For older children’s toys, be particularly alert to small detaching pieces that a younger child might choke on. When in doubt or just for practice, use your no-choke tester.

Equipment – products you purchase should have the seal of the Juvenile Products Manufacturers Association. This association independently tests children’s equipment to meet minimum safety standards and manufacturers who belong to the organization will usually adhere to these standards.

Playpens – should be as safe an environment as your baby’s crib. Avoid hanging toys or other objects across the top once your child is pulling up. Be careful of the size toys that are put in here, your toddler will use them for a climb-out. Once your toddler has learned to climb out of a playpen he will more than likely never stay in it for long again. The playpen’s effectiveness as a secure play area will at best be compromised and now represent problems in itself with falls from escape attempts. 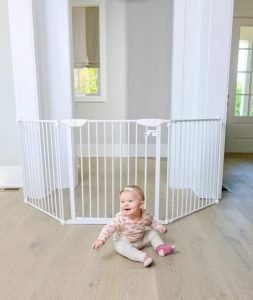 Safety gates – can make very effective barriers for a child until about age two. Most manufacturers do not recommend use beyond that age because of the heights of their gates and the risk of falls from toddlers climbing over. See Living Areas for more information on gate applications.

Safety gates are ideal for stairways but should be removed (particularly at the top) when your toddler has learned to climb over them. At the top of a stairway, use walk-through, swing open style gates rather than the type that have to be stepped over. If you keep stepping over gates at the top of a stairway, eventually you are going to trip and fall. Possibly while you are carrying your child. We recommend permanently attached baby gates for stairs or have a pressure type mounted so that it cannot be pushed loose, both of a type that can swing open to let you walk through. Be careful of tripping over the bottom rail if you have selected one of the popular metal swing open gates that are pressure mounted.

Strollers – need to be sturdy and secure from tipping or collapse while the child is in it. Fold up release type strollers should have at least two devices to prevent accidental collapse.

Hanging heavy bags or other items on the back of light strollers will cause them to tip over with or without the child in place.

When a stroller has been in the car or sitting in the sun, check the seat’s temperature. Use cloth covers to prevent hot vinyl or metal parts from burning sensitive skin.

Grandparents – Be especially careful at their home. Watch out for medications without childproof caps, ant and roach tablets, poisons and cleaners, small pieces, breakable items and hearts if an accident should happen here.

The only layer of protection here is your constant supervision. Preparation of meals and holiday festivities can be distracting; make sure one individual is responsible for supervision at any given moment and that you are informed when that responsibility changes hands.

Consider taking along an adjustable pressure gate or two to your parent’s home for barricading off the kitchen or a formal living room. Shut doors to bathrooms and off limits areas for older toddlers who maybe move faster than their supervision can.

Children run the greatest risk of being lead poisoned because lead is easily incorporated into their growing bodies, where it disrupts the normal growth pattern of cells. Accumulation of smaller amounts of lead in a child’s body may also result in damage that does not become visible until the child is old enough to express learning disabilities. Studies have shown that as many as three million children may have been exposed to lead poisoning, and many of these have been adversely affected.

Young children are most often the victims of lead paint poisoning, since they put almost anything into their mouths, chewing on wood trim, window sills and other potential lead-painted surfaces. The single most widely exposed group appears to be young children living in older residences contaminated by lead paint. Studies have shown that this group suffers subtle neurological damage, caused by blood lead levels which were previously believed to be non-toxic.

The potential to cause harm to small children has prompted some states to take legislative action against this problem, resulting in regulations that force home owners, tenants, and landlords to carefully examine the paint covering their dwellings.
The unborn child is also susceptible to lead health hazards.

Even without direct contact to environmental lead, the unborn child can be poisoned. If a pregnant woman has been exposed to enough lead, her bones may store high levels of lead. The metabolic changes which occur in the body during pregnancy may cause the stored lead to be released into the blood, thus exposing the unborn child. Because the unborn child is extremely sensitive to any environmental toxins, the potential for damage is even greater than that of exposing a child or an adult to the same amount of lead.

Of particular concern is the developing neurological system of the developing unborn child. Studies have claimed that permanent learning disabilities can be attributed to exposure during this stage of development.