as you’re set on a theme for the twin baby shower you’re hosting, and you’ve handed out the adorable invitations, then you need to start thinking about how you’re going to keep those guests you’ve just invited entertained. So let’s talk games! Here are ten twin baby shower games that are easy to administer if you’re hosting, but most importantly, ones that are not the least bit difficult to customize.

My Water Broke (click here to buy it on Amazon)

2. T-W-I-N-G-O!
A variation of the classic party game B-I-N-G-O, this game is as customizable as they come. You can personalize it by creating bingo cards with terms that are related to twins: ‘identical’, ‘fraternal’, ‘adorable duo’, ‘double the trouble’, ‘twice as nice’, ‘two peas in a pod’, ‘two scoops of sweetness’, and the list goes on. Throw in the parents’ names, and the names they’re considering for their little ones, to make it super relatable and to up its fun value. 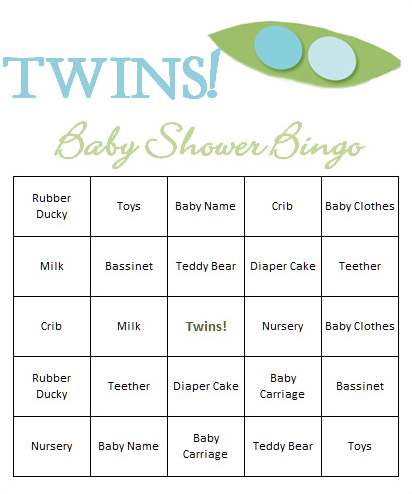 3. The Sock Dilemma
It’s a universally acknowledged truth that socks disappear come laundry time. This happens to adult-sized socks, let alone to those that fit tiny feet. So you can imagine how many unruly little socks a twin mom will have to be faced with…and the tinier they are, the crazier it gets. Let’s get her used to it with this game. Buy a bunch of pairs of baby socks in different colors and patterns (they’ll make for a great baby shower gift afterwards), separate all the pairs and throw them all in one pile on the floor where you plan to play the game. This is a timed game, where guests have to pair up as many socks as they can in a set couple of seconds (you decide according to how evil you feel like being, or how skilled you deem your guests to be).

4. Double Diaper Time
This is a hoot of a game, and the more competitive your guests are, the more fun and raucous it should get! It’s also a perfect game if the mom-to-be intends to use cloth diapers with her little ones, because you’ll have one to give her as a gift to start her off. For this game you’ll actually need a cloth diaper, a couple of safety pins, and a doll. Pair up your guests and explain the rules: Each team has to neatly put the cloth diaper on the doll using safety pins BUT using only one hand each (tie the other behind their backs if you have naughty competitors). After every team has had a go at it, mom-to-be decides whose was the neatest and proclaims them the winners.

5. Baby Talk
A classic word jumble that always goes down well! Think of a couple of twin-related terms, scramble up the letters in the words, put them in a list and hand it out to each guest. They have to unscramble the words. Time them – the first one to do it or get the closest to unscrambling all the words is worthy of a prize.

6. Noah’s Ark
This is a perfect game if you go with the ‘Noah’s Ark’ theme for the baby shower. It’s also very simple to play and requires no preparation. All your guests have to do is pair up and compete in writing down baby animals – as many as they can in, say, half a minute! They’ll probably all have 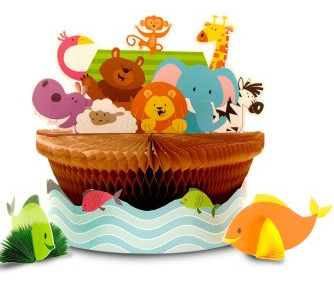 7. I Come in Pairs
There are two variations of this game, and you can actually try them both. If you’re not one for preparation this is definitely a good game for your repertoire. Pair up your guests in teams, and each team has to make a list of, either, all things that come in pairs, like earrings and gloves, or otherwise a list of things that go together, such as salt and pepper, mac and cheese. The pair with the most pairs wins – easiest rules ever, right?

8. Memorizing Pairs
Contrary to the last two on our list, this game requires quite a bit of prep time. You need to prepare a tray with various baby-related items on it – pacifiers, socks, mittens, shoes, hats, teethers, you name it. Make sure that you put two of an item for some; the rest, just one. So, on the tray you might have 2 pacifiers, 2 pairs of socks and 2 pairs of mittens, but just one pair of shoes, one hat and one teether. Display the tray to your guests for 10 seconds. As soon as you put it away, the guests have to write down how many things they remember on the tray, but they can only write down those where there were two of them displayed. Negative marking works best here: deduct a point for each item they list, where there was only one of it displayed on the tray! After the game, shower the mommy with a tray full of prezzies! 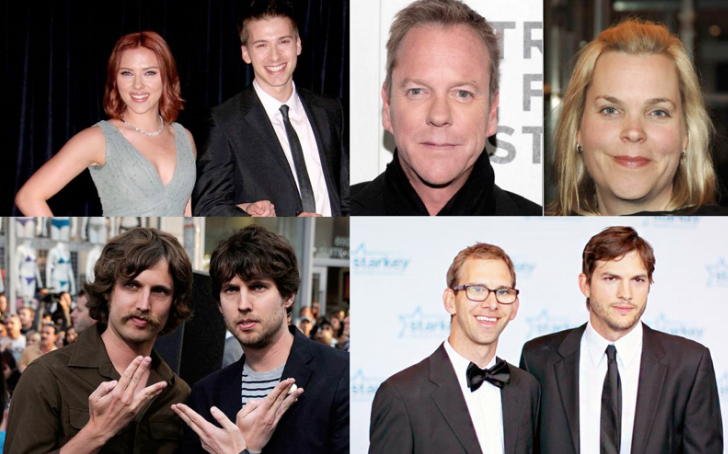 9. Twin Celeb Matching Game
Quite an easy game to prepare, but fun nonetheless. Prepare a list of celebrities who have had twins. On a separate list, have all their twin baby names. Guests have to match the famous parents to their babies. Whoever gets the most right wins (and should probably lay off the E! channel for a while).

10. Don’t Say “Twins”!
This is a simple, ongoing baby shower game, that’s nevertheless challenging. Present each guest with a clothespin upon their arrival. They have to wear it on their clothes, some place where it’s visible. Since the word “twins” is almost inevitable in a twin baby shower, it’s all the more fun to watch guests try to go around it, all throughout the party. Anyone caught verbalizing the banned word loses her clothespin. The catch is this: Whoever hears a guest say “twins” can take that guest’s clothespin and add it to her own collection. The winner is the guest with the most clothespins at the end of the party. 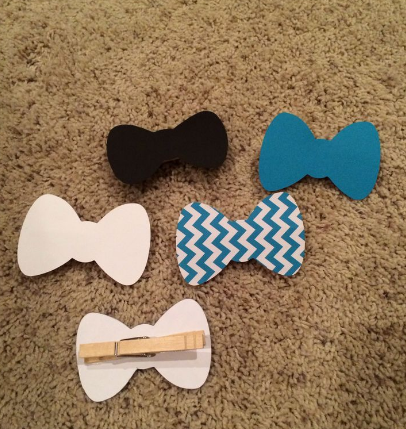 You can be as creative as you want with the entertainment section of the party, and really and truly, the games you choose depend on the type of guests you’ll be having. One general rule to keep by is to have simple games that everyone can take part in. Oh, and you definitely need lots of prizes as incentive! If at all possible, try to hand out prizes that come in pairs – socks, earrings, flip-flops, or any chocolate that comes in two bars per packet!

If you are looking for tips on throwing an AMAZING Twin shower, Please check out this link: Theme Suggestions for a Twintastic Baby Shower