The Internet LOST Its Mind Over This Photo

On Aug 21st Julie Li sent us this photo of a #momhack to feeding twins. She said we could feature it, and her hope was to share her idea with other twin moms. 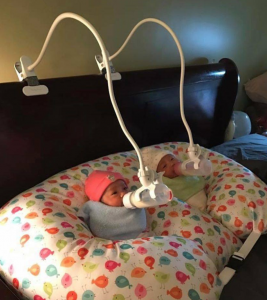 We shared it on our Instagram and Facebook, and the photo went viral instantly. With in a few days it had been seen by over 10 million people. It was shared over, and over…and over

There were a mix of comments. Most were impressed with the creativity, and others were asking where they could buy either the pillow or the hands free bendy things. The original bendy things are no longer available but any hands free Cell Phone Holder

will do the same thing.

BUT of course there are always the Judgey moms. It just comes with the territory. There are moms that always feel like they need to have their two cents. Some moms were concerned about safety (which is fair), but then there were moms calling Julie “Lazy” or suggesting that she wouldn’t bond with her baby.

These comments were a small majority, but RUDE and hurtful none-the-less. Julie replied to some people as she felt the need to defend herself. Every time she responded her comment would get trampled on by thousands of new comments. I finally decided that we should just share a new post with her words. I copied and pasted for the world to see

sigh so people start to leave negative comments now because they don’t understand the story behind this picture.

Usually I don’t explain myself but this is for all the moms out there who are struggling dealing with #acidreflux!!!! Why I have come up with idea isn’t because I am lazy or don’t want to feed my children. My twins are #pretermbabies, unlucky for me both of them have #acidreflux and #GERD!

If don’t know what it is, go do a research! Before I did this, I have to feed 1 hour PER baby PER feeding because I have to burp them every ounce they take or else they will spit up or projectile vomiting (although they do it anyway), and then I have to pump 15-30 at every 3 hour interval. Between feedings I only have about 30-45min sleep time. And that’s 8 times a days. In less than 1 month after their birth I ran through 3 fevers.

In less than 3 months I lost 30lb because I’m goddamn tired. I have an older child and I don’t have any help. So if any of those judgmental people want to judge, fine, I don’t care because y’all have never been in my shoes

But for those struggling moms with #twins or with baby who has acid reflux, there are ways to make things better. I would love to help and give ideas for those who need them!!! I will support all the moms who need a hand or advice on how to deal with this kind of situations because I understand the pain. And for those who are just concerned with safety issues, I am there every second to watch over them. I have to take them out at every ounce they take anyway so there is no way choking on the bottles. If any of you think this stupid that’s fine, why don’t you come up with something better. This isn’t for everyone or any stage for the babies. But I hope this will help for those who needs a hand!!!”
Julie Li
Thank you!!!

Honestly, if you are a twin mom who bottle feeds, you have probably propped a bottle on occasion. I know I have. There are twin moms who are exceptions to the rule, but in general it is really difficult to do back to back feedings and diapers, and never have a free hand. Sometimes mama just needs 5 min to breath hands free.

CLick here to buy the – The Bendy Things: AKA : Cell Phone Holder