Finding Out My Twins Had Down Syndrome… 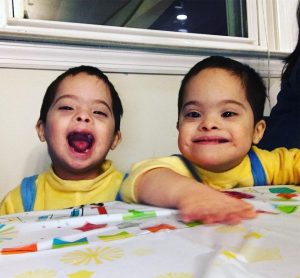 I’m a control freak, a perfectionist. I admit it.
I’ve always needed things to be done my way. I had what I considered to be the perfect life. A nice house, a great career, an amazing husband and a beautiful, perfect daughter. And if things weren’t perfect enough, the day before my 10-year wedding anniversary, I found out I was expecting identical twins. How perfect! How could I be so incredibly lucky? How could I have been so blessed as to have been given TWO babies?
Identical twins are so rare! I hit the jackpot, I thought. What an incredible gift!

The weeks following the initial ultrasound were pure bliss.
That is, until another ultrasound at 12 weeks revealed that both babies could possibly have Down syndrome. My heart sank. Surely this was a mistake. I wasn’t even 35 yet. Down syndrome didn’t run in the family; I ate a very healthy organic diet; and I was a good person, dammit! A very nice person! What horrible thing did I do to deserve to be punished in this way? Why was this happening to me?

I knew what Down syndrome was, and it wasn’t good.
Some of the grocery baggers at the supermarket had it. I would greet them with a strained “Hello,” feeling sorry for them. I had even seen a baby with Down syndrome at the park. I couldn’t even look at the child, smile at them like I did with other babies in strollers, because I knew their mothers would think I was doing it out of pity. Poor mothers.
Down syndrome was not good, at all. It was the worst thing that could possibly happen.

My husband and I decided to confirm the diagnosis via a new, highly accurate, non-invasive blood test. We waited two grueling weeks for the results. They came back positive. We were devastated. I cried, a lot. I cursed the heavens above for this cruel joke. How could I have been given such a beautiful gift, then have it turned into something so abnormal? What would our family say? What would our friends think? What would our babies look like? What would their futures be like? I thought of all the times I looked away from the “poor babies” and felt tremendous pity for their mothers.
Now I was one of them. My perfect life was now soiled and imperfect. I was in pain. I was mourning the loss of the children I thought I would have. I had no control over this.

Seeking some sort of solace, I reached out to several Down syndrome pregnancy support groups on the Internet. I posted my introduction, reluctant and shameful, “Hi, I’m Venessa and my babies have Down syndrome”. I expected condolences, virtual hugs, some advice for not bursting into tears in front of my daughter. Instead, hundreds of people responded with “CONGRATULATIONS!” They all said nearly the same thing, that children with Down syndrome are a blessing, that they would change my life and the lives of the people around them in the most amazing and beautiful way. That they were perfection.
“Perfection”? Really?

I looked over the flood of photos they shared with me of their adorable little babies, their toddlers, teenagers, adult children, their beloved aunts, uncles and cousins, all with Down syndrome. They were photographed on vacation, at school, at parties. Just like us, they were living normal lives. It all seemed so positive, no doom and gloom. In my research, I found out that Down syndrome is a chromosomal abnormality. A child with Down syndrome can be born to anyone, at any age, of any race, regardless of their diet or whether or not they were “a good person”.

I also found a documentary on YouTube called Dakota’s Pride. The film featured so many wonderful adults with Down syndrome that were excelling in all areas of life. They were athletes, business owners, public speakers, newlyweds. They were just like anyone else. There was no reason to pity them, no reason to look away. 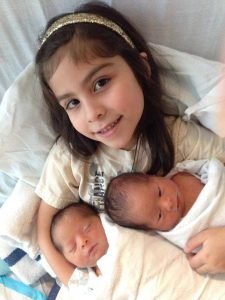 At the next ultrasound, I watched my babies (now confirmed as my little boys) bounce around, playfully pushing each other. I could see their little arms, legs, hands and feet. Their beautiful profiles. Their hearts, beating. My boys. I loved them from the minute I found out I was expecting. They were my children and I was their mother.

In that moment I decided to let go. Let go of the grief. Let go of the guilt I felt for the weeks I spent crying. For letting the antiquated information I had about people with disabilities cloud my vision of “perfection”. For letting the doctors fill my head with doubt and question whether or not my children were worthy of coming into this world because of their extra chromosome. Down syndrome was not the worst thing in the world. They would have a future. My children would go to school, and parties and vacations. They would wake up on Christmas morning and open the gifts that Santa left. They would climb into our laps at bedtime to hear a story. They would chase each other in the back yard in the summer and fight over toys. They would ask for extra ice cream on the rare days that we ate it. They would live a life of limitless possibilities, a life full of LOVE!

I let go of the sadness and chose to be happy. I was about to embark on a great journey.
I was 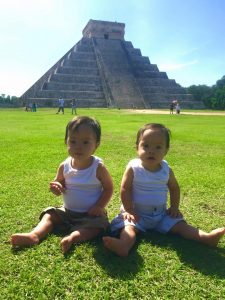 going to have two children!
And although the diagnosis of Down syndrome wasn’t anything I could control, my attitude and actions were. I had to be an advocate and the best mother I could be for them. So I began to celebrate them, my Julian and Noel, two human beings that were coming into the world. I bought matching outfits, decorated their nursery and had a spectacular baby shower (which I planned, of course)! I did all the things any mother would do to welcome her new baby into the world.

I admit, I was scared, even terrified at times. Like a giant wave, the due date was fast approaching and my life was about to change forever, ready or not. Sometimes I would lie awake at night wondering how I would feel when they were finally here. Would I still be happy? When I looked at their faces and saw the almond-shaped eyes, characteristic of Down Syndrome, would my heart break all over again? Would I cry out of grief and never stop?

And then on January 9th, that wave finally came crashing in.
My little boys made their debut, kicking and screaming. I frantically searched their faces, looking for confirmation of Down syndrome. They had my chin, my husband’s lips, my daughter’s ears and beautiful almond-shaped eyes–such BEAUTIFUL eyes. I fell in love, a kind of love I had never known before. I cried, yes. Tears of joy! 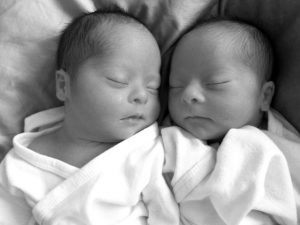 My boys were gorgeous. My boys were healthy and strong, not everyone is that fortunate. I was lucky, I was blessed! I held those two precious beings to my chest and thanked them for coming into our family, for choosing me to be their mother.

Soon after the delivery, a pediatrician cautiously approached my husband.
He said he suspected the boys may have Down syndrome. 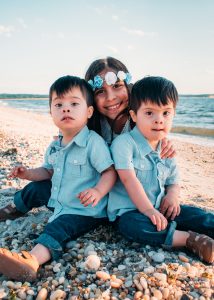 My husband, proudly holding his sons in his arms said, “Yes, we know. We’ve known for several months.” The doctor smiled and said, “Well, it looks like the came to the right family then.”
Yes, yes they did.
The perfect family.

For more information on Down syndrome, please visit the National Association of Down Syndrome at www.nads.org. Additional resources can be found at www.dsdiagnosisnetwork.org

Venessa Díaz is a writer, performer and Down syndrome activist from New York City. As a mother of 3, she spends her free time auditioning for Broadway shows, performing her one-woman play ORGANIC SOFRITO and picking Play-Doh out of the carpet. She is also Chairperson of GiGi’s Playhouse Long Island and dedicated to improving resources for individuals with Ds. Follow her on Instagram @OrganicSofrito and the twins at @julianandnoel