My Top 5 “Stupid” Twin Questions & Why I LOVE Answering Them

If you’re currently raising twins or multiples, you KNOW how much fun it is to play 21 Questions with random strangers. Strangers who don’t realize that you have only a few minutes to buy a week’s worth of groceries before they’re up from their nap and in full melt-down mode. Thrilling isn’t it? If you’re expecting twins, I hope you like attention. You’ll be getting plenty of it and will be asked all sorts of questions – some simple, some intrusive, all eventually getting old. Here are a few of my favorites and the reason why I don’t really believe any question is “stupid.” 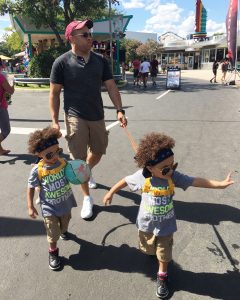 Nothing to see here. Just a man walking his twins…

Are they twins?
This one happens almost daily. My husband and I dress our boys exactly alike. They look alike. We parade them around (well, not really parade them, but sometimes that’s how it feels with all the stares we get) in a double stroller…and well, all the signs are there: yes, they are obviously twins. But I came to understand two things: for one, many siblings close in age are sometimes dressed exactly alike, especially “Irish Twins” (siblings born less than one year apart). Such was the case with me and my older sister who is almost exactly 51 weeks older than me. I have nephews whose parents also dressed them alike and were at times asked if they were twins. Secondly, most of the time that question is simply an icebreaker so the curious stranger can move on to the next question. There is always a next question. 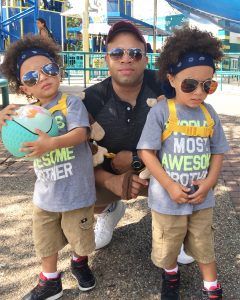 A perfect visual response to the “Are they twins?” question. Ummm…

My sister and I were often dressed like twins, as were my nephews, despite being a year apart.

Looks like you’ve got your hands full! Is it hard to raise twins?
This one usually prompts my maniacal I’m-half-crazed-and-losing-my-mind laugh. Is it hard? No, it’s not hard raising two tiny, eating, pooping, cranky, hyper, furniture-climbing, sibling-biting, crying, over-active, attention-needing little humans at once. It’s not just hard. It’s is truly THE hardest thing I’ve ever had to do in my life. I have, however, raised two singletons before my boys came along and will say there are times when it seems they happily entertain each other so I can have a cup of coffee in peace. Those 4-7 minutes are absolute bliss before its back to the twin mom grind. 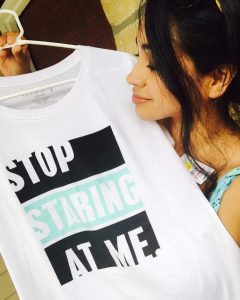 It looks like I’ve got my hands full because I just so happen to have my hands full. Now, stop staring and help me get my twins back into their stroller. Please and thank you.

Are they identical?
You’d think this was an easy one for people to figure out by just looking at your twins. Funny enough, I don’t know if my boys are identical. My little guys had their own sac and placenta and were considered fraternal. Once they were born, even our doctors began to question their zygosity (a big word Google taught me) after everything from their features to their blood type pointed to them being identical. Many people don’t know that identical twins can in fact have their own sac and placenta. It all depends on when the egg splits in the womb. We are considering a DNA test, but for now, it’s fun to wonder. In all fairness, there are identical twins who don’t look identical as well as fraternal/sororal twins who can pass for identical. Did you know, for example, that Mary-Kate and Ashley Olsen are NOT identical? Mind-blowing isn’t it? I know parents of boy/girl twins who are asked this question so here’s another rarely known fact: boy/girl twins CAN actually be classified as identical. It’s rare but possible. A quick search on “Turner Syndrome” will give you all the details. Learn something new every day huh?

Were they “natural?”
I know many women find this one rude and intrusive. But the first time I heard this one I was genuinely confused. What did she mean? In short, she wanted to know if I had undergone fertility treatments such as IVF (In vitro fertilization) or IUI (Intrauterine Insemination). My answer was simple: my twins were conceived naturally without “assistance.” The entire conversation ended with me embracing a woman in tears. A woman who had been trying to conceive for years and was seeking advice from someone who might have answers. I know many parents of multiples did in fact go through fertility treatments to conceive their children and this particular question can trigger some painful memories. They may not be ready to relive those experiences let alone share intimate details with a stranger. I would never suggest that anyone open up to someone if they aren’t comfortable, but I promised myself that I would be open minded and always answer this question truthfully. I don’t offend easily and am just fine having adult natured discussions since I am, last I checked, an adult. My twins never let me forget that I am, in fact, adulting 24/7.

Another way to interpret this question is “Did you deliver naturally or have a c-section.” All four of my children were delivered via emergency c-section so I’m happy to share my personally horrific experiences. I’m an open book so they’d better be ready to hear all the gory details. I don’t hold back (but I am gentle with expectant mothers). 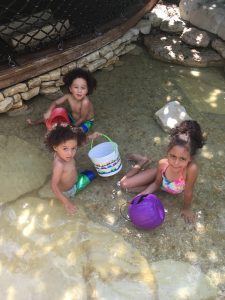 Before we were expecting twins, my husband and I were guilty of giving the now cringe-worthy shout of “Oh, look! Twins!” Be honest. You did it too. After we were told The Big News by the straight-faced ultrasound technician, we did enough research to put a seasoned FBI agent to shame. I think it’s important to remember that we are experts in this whole “twin-life.” However stupid a question may seem, we too were once completely clue-less. To me, having twins is better than winning a multi-million dollar lottery, and I’m happy to share the wealth with whomever is interested. My basic rule of thumb: be kind, be honest, and be stern when necessary. Oh, and ALWAYS answer “Do you need some help?” with a “Hell yes!” 😉